The Windom Police Department was officially formed in 1928 with the hiring of its first Uniformed Officer, John “Long John” Solem on March 1, 1928.  Records are sparse prior to 1928, but newspaper clippings show at least one prior constable, Tom Hawkins, who was responsible for the law within the City of Windom from at least 1905.  Chief Solem’s nickname “Long John” came from his above-average height for the time of 6’4” and his lanky build. It was mockingly said, that “he could walk the square in four paces.”

In 1935, the City purchased its first Police car.  The squad car pulled double duty as the town taxi ferrying night hospital workers and anyone who didn’t get picked up by the train.

Solem met every train that came to town and gave many a GI a ride home to their families.   In addition, to his regular police duties arresting drunks and thieves,  Chief Solem would check the businesses doors around 9pm, making sure they were locked, then at around 1130pm he would stop by the local restaurants, where people had left letters for mailing.  Depositing them in his satchel, he would take the mail to the depot and sort it for mailing.  Chief Solem was the sole Law Enforcement Officer in Windom until 1948 when he hired Bob Steele.   He worked as Chief of Police for 29 years when he retired in 1956 as the legendary “Long John” Solem.

After Solem retired, Bob Steele became chief in 1956, followed by George Letourneau in 1963, and Chet Baarstad in 1967. During this era, the police department was housed in an office in city hall. The department had two squad cars for use on patrol but the second car was the personal vehicle of the chief. Ofc. Horkey gives a ticket to the mayor

In this photo, Patrolman Howard Horkey is giving a parking ticket to the mayor.   The caption states that he took pride in the fact that everybody gets a ticket when he was on the beat.   He even gave a ticket to his wife, while the kids were in the car!  Don’t worry, the mayor got off pretty easy, back then the fine was just 50 cents.

In the 60’s, the department grew to a full time force of 6 which included Larry Ray, Howard Horkey, Wally Buhler, Jim Donahue, and Richard Thompson, as shown in the picture below, is rookie Merrill Bush getting his first badge. Wally Buhler recalls that his wage was two-hundred thirty dollars a month with a three dollar a month uniform allowance.  Officers typically worked long stretches of days with no overtime.  During one stretch, Buhler said he worked 108 straight night shifts had a few weeks off and then worked another 87 night shifts in a row.  The officers, led by Buhler’s initiative, eventually demanded that city hall give them overtime which the city finally granted for all police staff and all city employees. In mid 1970’s, the Police department moved to the new addition in the Sheriff’s office and Elton  “Al” Wagner took the department reigns in 1973.   Windom was one of the first communities in Minnesota to operate with the 911 system. 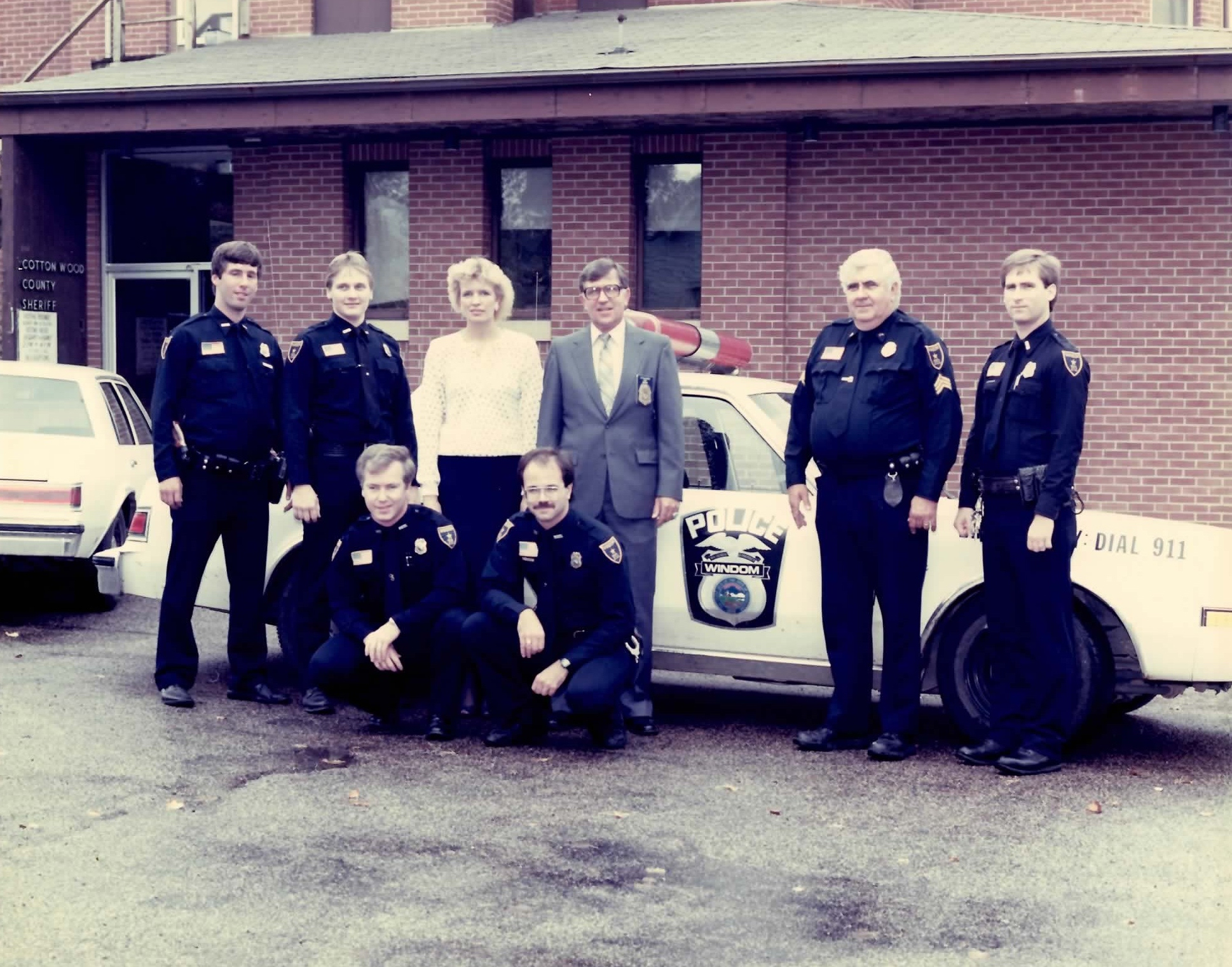 In 1993, the current Cottonwood County Law Enforcement Center was constructed and now houses the Police Department, Sheriff’s Office and a full-time jail.

In 1997, Chief Gary Johnson came to the department as chief for the next four years and was succeeded by long-time officer Jeff Shirkey.  The Windom Police Department currently has 9 full time officers including a Chief and Asst. Chief with officers with specialties ranging from investigations, Drug Task Force, D.A.R.E., Internet Crimes Against Children (ICAC), Defensive Tactics Instruction, and Firearms Instruction